There are numerous trek around Dharamsala, like Kareri Lake, Thatharna Trek and then Jalsu Trek.

A MUST DO EASY TO MODERATE TREK BY ANY ADVENTURE ENTHUSIAST AND NATURE LOVER BEFORE THE SYSTEM CONVERTS IT IN TO HELL IN THE NAME OF DEVELOPMENT, EASY ACCESS, SAVING TIME, COMFORT AND WHAT EVER KIND OF EXCUSE WE HUMANS CAN COME UP WITH

“If you are new in Trekking, Hiking then you need some guide on this trail and if you have done good amount of low altitude hiking and trekking then too you need two or more friends for this trek and if you are well experienced in Trekking the trails and Camping or know and prepared for the risk involved there in then can do this trek on your own ‘Solo’.”

Though this trek is comfortable and easy to start from Chamba, Holi, NayaGran and Lakke Wali Mata via Yada Gothe to Jalsu Gothe and finally Jalsu Pass but for “beginners” and  those who want to do this trek Solo with some taste of Adventure and as a test of stamina then it is best to start from Dharamsala, Palampur, Paprola, Uttrala side!

For this Trail you need to reach Sukuru (Sukrudu)  near Utrala Reservoir of Binwa Power Project of Himachal Pradesh State Electricity Board. To reach Utrala Colony you need to board bus from Paprola. (the last bus of HRTC from Paprola leaves at 03:00 pm.

I first read about this Pass in the blogs of Rijul Shergill, the Dhauladhar Trekker.

Did all of my homework about this trail by visiting Sukurdu and Uttrala in July 2015 and fixed up August 2015 for the trek. But the plan never materialized as the friend with whom I had considered this trail was busy and the Monsoon was on it’s peak.

But then enough is enough (since there is not much imagery input about the trail). On the noon of September 11th Friday 2015 from Dharamsala kicked up and boarded HRTC for Paprola and Utarala via Kandral.

They offered me the goat meat to which I politely refused (Vegan since year 2003). I eat Rice and Dal and slipped in to my sleeping bag memorizing the wise words of an experienced shepherd who in the same shop advised me never to start conversation with drunkards on trail shops.

By 04:00 am I was awake and by 5:45 am was ready for the trail. Then someone said very discouraging words like “You will get lost”, “You will not get to reach the huts and the pass” and sort of to which I replied smilingly that “I will retreat in any case the situation goes out of control (no over-confidence as I knew, I’m new on trail, but it will not hurt trying and also since I had full day with me to retreat in case, I could not trace the trail).

By 06:00 am I left Sukurdu and climbed up…I was going to follow the road with green carpet over it…when I heard a female voice from the homes up ahead…She directed me to the shortcut for the trail (I was really thankful to her as the half complete road would have consumed more of time and energy).

I however got the sight of Father and son duo 1 km ahead of me…that view was also of great help…as that helped me identify and keep an eye on steep short cuts. Though soon the duo disappeared in thick woods.

And as I touched the main trail, was welcomed by the smell of decaying carcases of some cow which was hunted by a leopard or bear (no mistake of Leopard or Bear as we humans usually trespass in to their homes).

After some turns through the woods, I met another fellow who also took me as the dealer and he literally shook me by saying that “You will reach the Pass on the night of second day (Sunday)” =:O.

I thanked him for his advise and moved on.

By 07:00 am I reached the first tea shop and huts in Bakluddu..and there I again inquired for the trail and got some positive input from father son duo and some other fellows…though they also doubted my motive of going for the pass but appreciated me for the time I took to reach Bakluddu from Sukurdu and assured me that “I will cover the Pass by evening”.

After about 500 meters, I came across a hill side with milk like water fall on to the right, that I relished to refresh my self. Re-energized and continued again.

I was lost on my own…and then suddenly from a blind turn of the trail, a pair of rushing horns appeared…it was like “WT##” and since there was a deep fall to the left, I quickly sprang towards right up side of the hill…it was a pair of cows chased out by the owner!\

From there I was cautious at every turn. On this trail up to Khodtru and Parai Gothe, I came across 3-4 villagers retreating with their Livestock and also to mention lots of carcasses of Livestock at different spots, a reminder for that “You are in the home area of Leopards and Bears”.

The trail ahead Parai Gothe reminded me of Kareri Lake Trail.

After around 1 hour of trek, I tried to scan the presence of any human being. At the distance of around 500 meters, got the sight of black and white spots, a sign of Sheep or Goats, which meant a hut of Gaddi Shepherd. Relived and made my way towards the hut on trail side, crossed the glacier fed rivulet and greeted the shepherd.

At 11:25 am started my final climb for Jalsu Pass, here some words from the shepherd made me feel relaxed and bit of over-confident and started easy on trail with mobile camera and shooting (a mistake that cost me on reduced speed and getting tired). Here too I met 3 villagers with their livestock, retreating from the Pass.

I inquired one fellow about the remaining distance to cover…and since he was observing my speed, he blatantly confirmed that “Since you almost took an hour to cover 1/3rd of the distance, so you’ll need another 3 hours to reach the top and another 2 hours to climb down towards Chamba.

Re-calculated and indeed I took 30 minutes to cover just 1/3rd of the final trail…so I packed my mobile back in the backpack and tried to regain my speed. My both shoulders were tanned in the shiny sun and by the time I covered 50% of the final trail…fog and clouds started to roll in over Dhauladhar Range from South-East.

At one point I was greeted by the giant Himalayan Griffon Vultures, effortlessly hovering over the Pass. Just like a Free Spirit. Here you can breath in the Clean Unspoiled Fresh Air and the Sweet Fragrance of Herbs and other Flowers.

Around 02:00 pm I was in Jalsu Pass. It was only me, Dhauladhar and four horses and a cow grazing the green stock and some ravens feeding their kids.

Thanked Dhauladhar and Mother Nature for helping me reach Jalsu Pass. With the views of Jalsu and Chamba side, I relished homemade Peanut Butter with bread and shared it with Horses, Cow and the Ravens.

It was around 03:00 pm when, I again felt the heat of strong, cold winds and the push of thick fog from South East. The views of Jalsu Gothe and Chamba were calling me to climb down and I slowly trekked towards Chamba side.

On Sunday morning I decided not take a bus ride from Holi to Dharamsala via Chamba and called off the trek to Yada Gothe, Lake Wali Mata NayaGran, Holi and by 07:00 am decided to retreat for Palampur Dharamsala via Jalsu Pass.

This time accompanied by a Baba, who was coming from ManiMahesh and had planned to reach Baijnath. We climbed back to Jalsu Pass and I got some good and clearer view of Jalsu Pass under Sunrise shine.

We were in no hurry and arrived at the temple of Narmdeshwar Mahadev in Samlotu Fatahar near Utrala by 07:30 pm before parting away for own destinations. 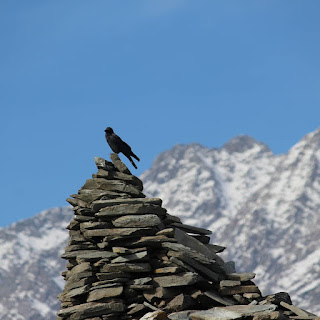 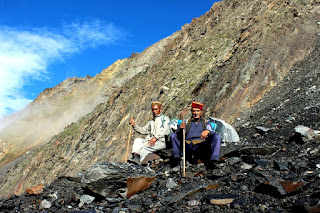